Strength's of the German Educational System

*  Free!! Education is free in Germany, even college.
*  There is a lot of parent involvement; parents help with homework every night.  The German education philosophy is that learning begins in the home.
*  Strict Discipline (there is a large value in discipline in Germany)
*  Shorter school days; allows more time for homework and many people believe the shorter school days are better for children to retain information they learn each day.

Weaknesses of the German Educational System

*  Strict Discipline (some think it is too focused on discipline)
*  Curriculum is very focused on academic pursuits rather than a range of more general interests such as photography or different kinds of music (Dilengue 2012).

*  The system is quite rigid with the pupils placed into the different types of schools based entirely on their academic performance (Dilengue 2012).

*  No extracurricular activities after school.
*  Lower-class and migrant families are not supported enough and fail at school in much higher numbers (Textor 2).

German children's literature often has clear morals and is intended to scare children by using severe consequences.  These stories are known all over the world and are sometimes re-interpreted through school plays.  Two of the most well known stories are the Daumenlutscher and the Struwwelpeter.  These stories are good examples of how strict discipline is valued in Germany.

This story is about a boy who sucks his thumb.  His mother warns him that if he sucks his thumb while she is out, that the tailor will come and snip both of his thumbs off with his long scissors. 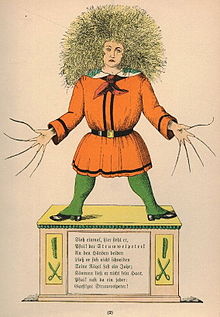 This story is about a little boy who doesn't groom himself well and so he becomes very unpopular and an outcast.